We were in Shangrila mall this pm when I asked my son where he wanted to eat an early dinner. He said, “let’s try something new.” Yun pala, he saw the diner (is that the right classification for it) Secret Recipe

SR is located on the fifth floor of the mall, beside Wham Burger. It is brightly lit, has rectangular tables on either side of which are two chairs. On the walls are mirrors alternating with pictures of delicious looking cakes and entrees

The man who was dressed differently, the manager, I presume, didn’t seem to want to answer questions. After saying the lamb was highly recommended, he left us. Maybe he didn’t want to be mistaken to be a waiter? So unlike the maitre d’s of other restos who go out of their way to please the customers. Oh well.

Then Bernard came to our table and smilingly recommended certain items. Top of the list was the lamb stew, so I thought if two out of two personnel say it’s good, it must be. Bernard asked if I wanted rice with it or mashed potato. he said he’s a rice eater, so he suggested I order rice. Later, I asked if I could order mashed potato on the side to go with the stew because it seemed appropriate. The waitress (bernard was serving another table) said, no, they didn’t accept mashed po as a side order. So I said “Okay rice then.” She asked “what kind?” Oh, reminiscent of a trunk line manned by call center people where choices are endless. She answered, “Plain or buttered”. I ordered the latter. What I should have done, I realized, was to order the stew with mashed po, and then ordered rice on the side. Now I know better. 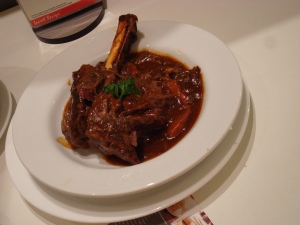 was lovely, very tender and flavorful. It didn’t require a knife to extricate the meat from the bones. My son said, though, that except for the tenderness of the beef, the sauce was ordinary, even as he kept picking on it.

. Wow, yummy. Sour and hot (not temperature hot, but spicy hot). My son marveled at how I could stand the spiciness, even as he pointed at the red pepper flakes floating on the broth and sticking to the sides of the bowl. He couldn’t imagine how I managed to enjoy the soup when as a rule, between him and me, it is I who can’t stand spicy hot potato chips et al. The soup had flat noodles, lemon grass, straw mushrooms and two large prawns. Really good. One order (P240) was good for the three of us. There was a little left over.

on top of which was lots of basil sauce on a mayo or cream base. I didn’t try it as I am not too fond of basil. On the side of the fish were two lettuce leaves. I think there was cauliflower too? Not sure. My son ordered dory with lobster sauce 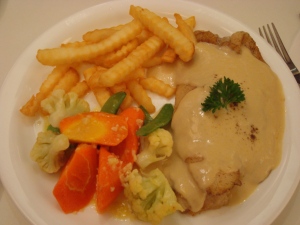 . As a rule he doesn’t eat crustaceans for fear of an allergy but he didn’t develop an allergy despite the base of the sauce. His plate had some cauliflowers, sliced carrots and rippled french fries. Very good. Now I’m not sure if the cauliflower my husband asked me about was from his or my son’s order.

As a finale, we had oreo cheese cake 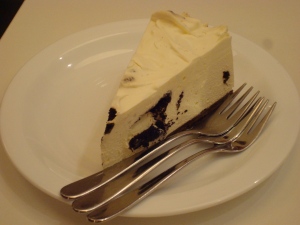 . My son said it was ordinary but I thought it was all right. He then said it was not cold enough and would have tasted better, cold.

Will we go back to Secret Recipe? I don’t see why not except for the service. Bernard was eager to please but he wasn’t always available. I guess there weren’t enough servers because catching their attention for an extra plate, a glass of water, a serving spoon, etc. took time to be conveyed and carried out. I think the personnel need more training in graciousness. I could sense a certain pique whenever we called them for something or other. In Kimpura, the waiters, the maitre d’ and the ladies are more than willing to see to the customers’ comfort. Birth pangs? The resto opened shop in January.

I asked Bernard who owned the place. He said it was a Malaysian chain operated by the Tan family here in the PHilippines. You may wonder why I ask about the owners of a place. Somehow, I feel their identity is indicative of the quality or the lack of it of the food served, if the family is known in the culinary circles.

Looking at the pictures, I realize that some entrees lack color: the sea bass, the lamb stew and the cheese cake, for instance. The dory is brimming with color, it’s enticing. My husband praised the menu because it uses a lot of white and very few of other colors

. Reminds me of templates for wordpress blogs, haha.

2 thoughts on “Secret Recipe, the restaurant”